Book Now!
Tyler Palo
"You are braver than you believe, stronger than you seem and smarter than you think." - Christopher Robin

Tyler Palo is an actor, based in New York City, with an MFA in Musical Theatre from The Guildford School of Acting (UK), and a BFA in Acting from Westminster College (USA). He has most recently appeared singing and dancing in New York City’s “Off-Broadway in the Boros” Festival with Salgado Productions. Tyler has also performed professionally throughout the US and the UK (including the West End) for the last ten years. Trained in Contemporary and Classical Acting; Tap, Ballet and Jazz Dance; and Legit, Contemporary, Pop, Rock and Character Musical Theatre Voice work, Tyler excels in a range of styles. Whether in a Golden Age Musical, a Shakespearian Tragedy, a Physical Theatre piece, Greek Theatre or a New Musical, Tyler delivers a skillful performance.

"...A strong cast of professional actors...Of course there are the comic figures – and this show was chock full of them. Jingle [Tyler Palo] and Jangle, a pair of dimwitted palace runabouts... This is good family panto at its best." - Muddy Stilettos - Professional Review Web Site

"Greek theatre is known for long expository monologues, and Ion has its fair share, but they are presented in creative and engaging ways—there is no boredom in this production. The first speech of the play has the messenger god Hermes (Tyler Palo) setting the scene for what’s to come. He bounds energetically around the stage, inviting the rest of the cast to participate and act out the story of his exposition. This first monologue ends in a gorgeous tableau, with each chorus member atop a pillar in a perfectly statuesque pose." - Front Row Reviewers

"The whole cast had an electric energy together, a chemistry that would be more typical of a cast that’s been touring for months together instead of rehearsing for a few weeks. Daisy Sherman and Sierra DuCharme-Hansen play the current and late wives of Charles Condomine, played by Tyler Palo. The three of them have excellent dynamic and as the alliances shift among the characters, these actors navigate the changes beautifully." - Utah Theatre Bloggers

"I have seen this show done a few times now and I must say, many times, Charles is portrayed as this ramrod spined Brit with no emotion. In this production, Charles had more than a few wild moments – which you would expect for someone who has his ghost wife living with him and his new wife! He was allowed to have emotions and (sometimes) be just a little physically comedic (a style that suited Mr. Palo well.)" - Front Row Reviewers Utah

The Importance of Being Ernest - 2017

"Perhaps the best metaphor for this show is how director L.L. West has squeezed the most dramatic energy out of a minimalist set... evidenced by the play's two manservants, whose unsettling entrances and exits find new angles in Wilde's comedy. There's Tyler Palo's Lane, whose gloved hands expertly balance a silver tray while constantly keeping his employer ever-so-efficiently off-guard. And...Merriman [also played by Tyler Palo], ...whose butler character displays the mincing seriousness of a physical clown. (You could amuse yourself all night by tracking the blocking of the actors via the X's and O's of a football coach's playbook.)" - The Salt Lake Tribune

Tyler Palo added emotional depth and intricate human characteristics. [He was] passionate, greedy, unhinged, desperate, flawed, steadfast, immature, or obsessive. [His character was] much more interesting in this production than in the script. It must have been a great deal of work to pull such dimensional characters from such flat ones." - Utah Theatre Bloggers

" Finally, Tyler Palo (playing Joey and Clifford) deserves special praise for playing a believable child, something most adult actors struggle to do. I would have liked to have seen these supporting actors take on more roles, ..." - Utah Theatre Bloggers

"...I specifically appreciated its clarity through the complex harmonies in ...'On the Willows, [duet by Tyler Palo and Edward Lopez]..."- Utah Theatre Bloggers

While all the actors playing townspeople brought depth into their conflicted characters, the couple that really stood out to me were the Hungry Townsperson (Trayven Call) and the Young Townsperson (Tyler Palo). Both gave very moving and memorable performances. As a child, Palo balanced his giddy excitement with just enough innocence to make his role believable." - Utah Theatre Bloggers

"The entire cast performs [the songs] beautifully, imbuing them with all the charm and emotion they deserve...Nate Mikami, as Adam and Noah, and Tyler Palo, as Abel and Ham, were excellent as well." - The Davis Clipper 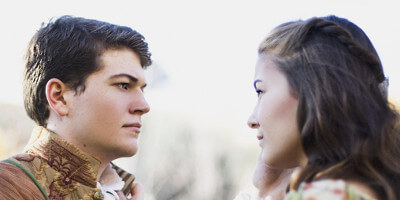 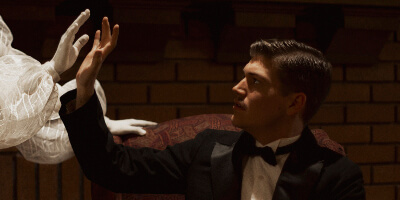